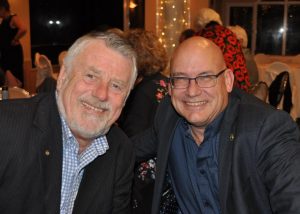 A cold night out did not dampen the spirit of Rotarians who gathered at McHughs to celebrate the changing over of presidents, which is something that is an annual occasion.

It was a big thank you to  Paul Treacher, our 41st President, for the great work he has done during his 2018/9 term which saw over $50,000 raised and donated to numerous charities and deserving projects.

An oversight meant that the chains did not get a formal handover to our 43rd president Gavin Busch but maybe this can be remedied at our next meeting where Gavin will present an overview of his plans for the upcoming year. Gavin alluded to the fact that to move forward and to keep membership vibrant there might have to be some changes in the way things are done. 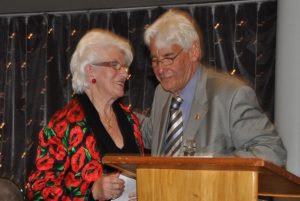 Lynn Dawson receives a $500 Community Service Award from Colin Cannon in recognition of the good work she does in the community.

In 2013 Lynn, expanded what had started out as a women’s prison based project, into a community project of 5 Peggy Purl groups around the North Shore of Auckland  The first 2 years saw more than 1000 Peggy Purl blankets created and gifted to vulnerable children around the communities in which they were made.    Now rebranded as Peggy & Friends in Your Community, there are now more than 30 programmes working in and for their own communities from Northland to Christchurch with more to come in 2018.
The Rotary Community Services Award will contribute to resources and the establishment of more Peggy & Friends groups around the Auckland region in 2018.

I was asked to join Devonport Rotary in 1985.  I thought it would be good to join a local community service organisation and as my father had been a Rotarian I readily agreed. Rotary is respected internationally for the amazing…

My father was a Rotarian back in the days when it was a men’s only club and one had to wait to be invited to join. How things have progressed since then and when I discovered I could go on…